KFF: Challenges in the U.S. Territories: COVID-19 and the Medicaid Financing Cliff

KFF: Challenges in the U.S. Territories: COVID-19 and the Medicaid Financing Cliff

More than a year into the public health emergency, the COVID-19 pandemic continues to impact the lives of Americans including those living in the U.S. territories. Prior to the pandemic, the U.S territories – American Samoa, the Commonwealth of the Northern Mariana Islands (CNMI), Guam, Puerto Rico, and the U.S. Virgin Islands (USVI) – faced an array of longstanding fiscal and health challenges that were exacerbated by recent natural disasters. Differences in Medicaid financing, including a statutory cap and match rate, have contributed to broader fiscal and health systems challenges for the territories. While additional federal funds have been provided over the statutory caps, these funds are set to expire at the end of September 2021. Without additional Congressional action, the territories will lose the vast majority of Medicaid financing which could result in reductions in coverage, services, and provider rates which could negatively impact the territories as they deal with the long-term health and economic consequences of the pandemic. This brief looks at how the pandemic is affecting the territories as well as issues related to the upcoming Medicaid fiscal cliff.

Health Status and Systems in the Territories Pre-Pandemic

Additionally, the health care systems in U.S. territories have faced longstanding challenges, including deferred repairs to hospital facilities4 and major provider shortage issues. Recruitment and retainment is difficult as salaries for providers in the territories are substantially lower than they are for providers in the U.S. even though providers in most territories must be U.S.-licensed.5 Constraints with providers as well as system capacity sometimes requires that patients get care off-island.6 For example, prior to building its own oncology center on-island, CNMI sent over 300 patients a year to Guam or Hawaii for care.7

These health care system challenges were greatly exacerbated by recent natural disasters that occurred pre-pandemic. Typhoons, earthquakes, mudslides, and volcanic eruptions throughout the territories have caused extensive damage to hospital facilities, increased rates of provider outmigration, and increased the overall number of patients and the number of patients with more complex mental and physical health needs.

Effect of COVID-19 and Vaccine Roll-Out in the Territories

Early in the pandemic, the U.S. territories struggled with COVID-19 testing limitations and therefore COVID-19 cases and deaths may be underreported. In March 2020, only Guam and Puerto Rico were able to perform COVID-19 testing in their public labs but faced limited capacity due to supplies and staff.8 The other three territories had to send their testing samples to Hawaii or to the mainland – leading to longer turnaround time for results – until they acquired their own testing and analysis equipment.9 While Puerto Rico did have public labs to perform testing, in the spring of 2020, it had the lowest per-capita testing rates10 compared to any state and struggled to obtain the necessary supplies in order to increase its testing capacity.11 Guam, on the other hand, lacked staffing to administer tests.12

The pandemic exposed pre-pandemic health system issues that remained after the natural disasters. With the surge in COVID-19 cases, most territories reached hospital and ventilator capacity quickly and needed to recruit health care providers, especially nurses, from the mainland United States or neighboring international islands.13,14,15 For example, in September 2020 in Guam, when fatalities increased and as more providers left the island, island officials looked to recruit 100 nurses from mainland U.S. or nearby Philippines.16 An infusion of funds from the Coronavirus Aid, Relief, and Economic Security Act (CARES Act) helped some hospitals purchase additional hospital equipment and personal protective equipment (PPE).17,18

Due to the previous surge in cases, Puerto Rico imposed more rigorous precautions. Early on, Puerto Rico issued overnight curfews and lock-down orders, which were punishable by fine or jail time.20 In June 2020, businesses were fully reopened,21 but variations of the curfew have remained in place. In-person schooling reopened in March but was closed as cases surged in April22 and beginning April 28, travelers must show proof of a negative COVID-19 test or face a $300 fine.23

Similar to the states, CNMI, Guam, and USVI also imposed lockdowns, including some travel restrictions into the islands, but have slowly reopened businesses with varying degrees of capacity and service.24,25 USVI has so far not altered its reopening plans to address the recent surge in cases in early May.26 American Samoa, which has had no reported COVID-19 fatalities, had already implemented social distancing and school closures in December 2019 due to a measles outbreak.27 In March 2020, in response to the pandemic, the government halted all flights in and out of the island, allowing only one weekly cargo flight in to provide medical supplies and food. Any American Samoa residents that left, including those needing medical services off the island during the pandemic, were not allowed to repatriate until early 2021.28

The share of individuals ages 16 and older that have been fully vaccinated has more than doubled, and in some territories quadrupled, from March 1 to May 1, 2021 (Figure 1). As of May 1, every territory, except Puerto Rico and USVI, has fully vaccinated more than 30% of the eligible population. The territories have received vaccines at rates similar to states in U.S,29 however some territories are administering a smaller share of delivered vaccines when compared to the U.S. overall. As of May 12, 2021, the share of delivered doses that had been administered in the U.S. was 78.5%, while CNMI and Puerto Rico’s shares were considerably lower (with 60.3% and 63.1% of delivered doses that have been administered, respectively). Issues related to administering vaccines could be caused by lack of staffing, challenges in reaching residents in more remote areas, or a lag in reporting.

The U.S. territories followed similar vaccination eligibility protocol to the U.S. with priority given to older populations, health care workers, and other essential workers. Additionally, all U.S. territories opened COVID-19 vaccinations to all adult residents earlier than President Biden’s April 19 deadline. Additionally, the territories utilized vaccination approaches that were tailored to their island’s needs to reach higher shares of their populations. For example, CNMI applied strategic outreach to the elders in the community,30 while American Samoa, which only has one public hospital, used a drive-through vaccination site as an additional means to reach a higher share of their population.31 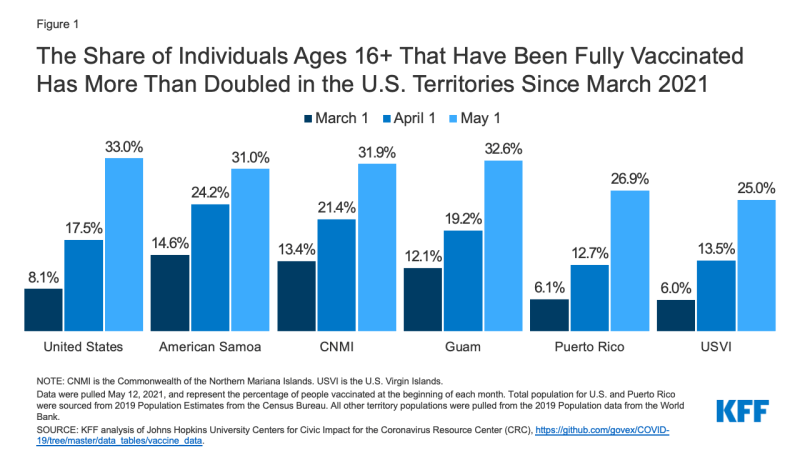 Figure 1: The Share of Individuals Ages 16+ That Have Been Fully Vaccinated Has More Than Doubled in the U.S. Territories Since March 2021.

Key Financing Issues for the Territories

Prior to the pandemic, the most of territories experienced fiscal stress that was exacerbated by natural disasters or emergencies. For example, USVI saw its economy declined by over 30% between 2008 and 2016, accompanied by population loss and job loss in certain industries, while Puerto Rico faced years of economic recession and debt, ultimately prompting the creation of the Financial Oversight and Management Board (FOMB). These economic challenges were exacerbated by the natural disasters which accelerated the outmigration of residents and health care providers, destroyed homes, schools, businesses and other infrastructure, and lead to the loss of revenue with reduced tourism and economic activity.

The structure of Medicaid financing for the territories has also contributed to fiscal stress. Unlike in the 50 states and D.C., annual federal funding for Medicaid in the U.S. territories is subject to a statutory cap and fixed matching rate. The territories’ federal matching rate (known as the federal medical assistance percentage, or FMAP) is fixed in statute, unlike the statutory formula for states, which is uncapped and adjusted annually based on a state’s relative per capita income. The U.S. territories’ FMAP rate is set to 55% (though it has been increased in the aftermath of natural disasters and the public health emergency), but if the matching rates were calculated using relative per capita income, all territories would receive a higher FMAP, likely at or close to the maximum allowable 83% matching rate. Notwithstanding temporary relief funds, once a territory exhausts its capped federal funds, it no longer receives federal financial support for its Medicaid program during that fiscal year. This places additional pressure on territory resources if Medicaid spending continues beyond the federal cap – making the effective matching rate lower than what is set in statute.

Over time, Congress has provided increases in federal funds for the territories broadly and in response to specific emergency events. Temporary funding can provide short-term relief, but also create fiscal funding cliffs that require ongoing Congressional action. The allotments for each of the territories for FY 2020 and FY 2021 are around seven to nine times the statutory levels as a result of additional funding added in the FY 2020 appropriation package and the Families First Coronavirus Response Act (FFCRA) (Figure 2). Puerto Rico was eligible for an additional $200 million in FY 2020 and FY 2021 contingent on a provider rate increase equal to at least 70 percent of what Medicare Part B would pay for services. In addition to increased federal funding, the traditional territory of 55 percent was increased to 76 percent for Puerto Rico and 83 percent for the territories through FY 2021 (with an addition increase of 6.2 percentage points as part of Medicaid fiscal relief available for all state and territories if certain maintenance of eligibility requirements are met). As noted in recent Congressional testimony, additional federal funding in Puerto Rico has been used to support increases in coverage, additional benefits (like hepatitis C treatment), and increased reimbursement for hospitals, physicians, and managed care plans.

Unless Congress acts, the U.S. territories will lose over 80% of their funding and there will be a major Medicaid financing cliff in at the end of FY 2021. Without federal action, territories would need to make significant changes to their programs to cut Medicaid provider payments rates, benefits, or eligibility criteria while still managing the effects of the pandemic. 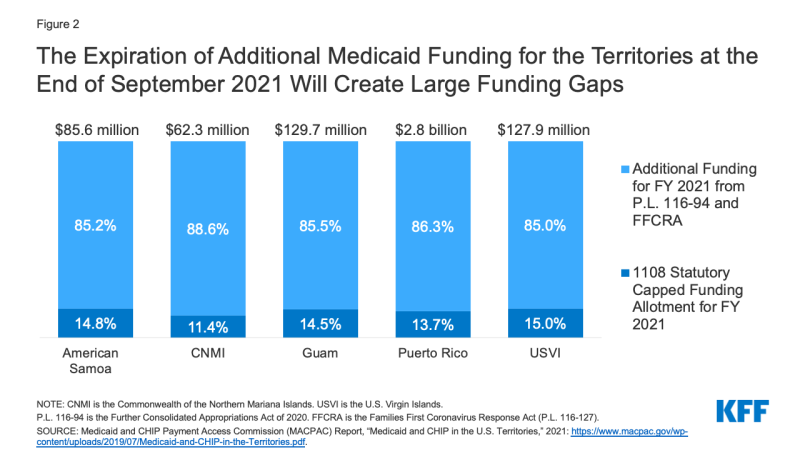 Figure 2: The Expiration of Additional Medicaid Funding for the Territories at the End of September 2021 Will Create Large Funding Gaps.

What to Watch Looking Ahead

New federal funds and efforts to provide vaccines will help address the pandemic. The American Rescue Plan Act provided $4.5 billion in Coronavirus State Fiscal Recovery Fund Payments that can be used to respond to the “negative economic impacts of COVID-19”32 and $700 million for critical capital projects to “directly enable work, education, and health monitoring in response to COVID-19”33 that may help alleviate some economic challenges for the islands.

The expiration of temporary Medicaid funding at the end of September 2021 will result in a major fiscal cliff if Congress does not act. The territories could lose the majority of federal Medicaid financing as the temporary funds make up more than eight in ten federal Medicaid dollars in each of territory. Without federal action, territories would need to make significant changes to their programs to cut Medicaid provider payments rates, benefits, or eligibility criteria while still managing the effects of the pandemic.

Congress may consider increasing the caps or more fundamental Medicaid financing changes such as eliminating the funding cap and revisiting how the FMAP is set. Increasing the funding caps could provide short-term relief. Congress may also consider proposals to eliminate Medicaid funding limits in the territories like, the Insular Area Medicaid Parity Act (HR 265), the Territorial Equity Act of 2021, or proposals that would transition funding from the current structure to achieve parity with other state programs over time (like HR 3371 from the last Congress that would achieve Medicaid financing for Puerto Rico over 10 years). Temporarily increasing the spending caps in the territories could avert the upcoming fiscal cliff; however, such action could also create another fiscal cliff in the future and create uncertainty in the availability of federal funding longer term without more permanent financing changes.

Modern Healthcare: Puerto Rico: The ‘canary in the coal mine’ for Medicare Advantage growth

Puerto Rico: The ‘canary in the coal mine’ for Medicare Advantage growth By Maya Goldman, Modern Healthcare Medicare Advantage enrollment expands each year, with 2.3 million new people covered in 2022. As the program grows, Read more…